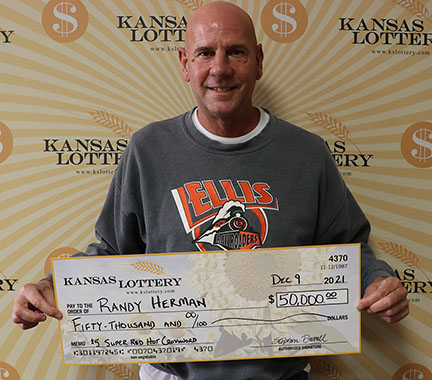 The weather may be cooling off, but the holiday season is red hot for Randy Herman of Ellis after winning $50,000 on a $5 Super Red Hot Crossword instant scratch ticket!

The funny thing is, Herman didn’t even want to play the Super Red Hot Crossword that day, but the store was out of the game he was looking for.

“I wanted to try some of the $10 games, but when I looked at the ticket display, I realized they were out of the game I wanted,” said Herman. “So instead I decided to go with six of the $5 Super Red Hot Crosswords.”

Herman took the tickets home with him and planned on scratching them later. When he finally plays the very first ticket, he realized he was matching more words than he expected.

“I called out to my son and had him look at the ticket with me,” Herman said. “He also saw a $50,000 winner! I couldn’t believe it. We just kept looking at the ticket and counting over and over.”

“I finally got to show my wife the ticket, and her first reaction was to ask if this meant we could finally get a new couch,” Said Herman with a laugh. “So we’re already thinking about what we can do with the winnings!”

Aside from a new couch, the Herman’s do have some other ideas on what to do with their big win. “We are going to do some HVAC work to the house, and now we won’t have to take out a loan to do that,” Herman said. “Then we may look into getting our son a vehicle, and probably take a nice vacation somewhere!”

The winning ticket was sold at Casey’s General Store 1930 in Ellis. There is still one top prize left in the $5 Super Red Hot Crossword instant game, as well as thousands in other cash prizes.

Players are invited to submit all their winning and non-winning tickets in the Kansas Lottery PlayOn® Players Loyalty program to earn points for drawing entries and a chance to win cash and other prizes!  PlayOn® is a registered trademark of Pollard Banknote Limited used under license.